LAHORE: Chairman Pakistan Peoples Party Bilawal Bhutto has warned Nawaz government that he would change his current slogan of "Go Nisar Go" into "Go Nawaz Go" if his four demands were not accepted before December 27.

"I am fed up with what is happening. NAP has failed and Takht-e-Raiwind was not ready even to talk against terrorism leave aside fighting against terrorism," PPP Chairman stated in his speech at the PPP's Foundation Week celebrations organized by PPP South Punjab.

Bilawal Bhutto Zardari repeated PPP's four demands which include parliamentary scrutiny of the security policy, investigations into the massive Panama Scandal through the legislation proposed by PPP together with other political parties, implementation of resolution about CPEC passed unanimously by an All Parties Conference presided over by former president Asif Ali Zardari, and a democratic accountability of foreign policy and foreign minister.

He lashed out at the Nawaz League for spending the funding from the world for Balochistan, KPK and Sindh on Orange Line. "These funds should be spent on health, education and eliminating poverty not on lavish facilities," he added.

. Im sure satan has said that dad is more devil than me

Doordie said:
What about dad

. Im sure satan has said that dad is more devil than me

Who is Bilawal, heard that name before but cant remember

Who is Bilawal, heard that name before but cant remember

I agree with her...she can change the chants and slogans......at max.
G

bilawal beti, you should work on "go daddy go" first! 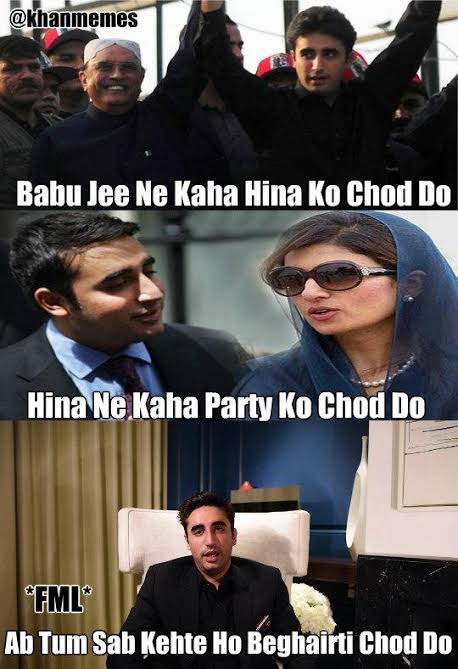 Imagine if he ever become our Pm,he would have to face the likes of modi and trump.
I cant see that
You must log in or register to reply here.